The strategic goal of Hamlet Pharma is to develop novel cancer treatments for patients who currently lack therapeutic options. Conducting clinical trials is crucial to reach primary goals such as evaluating the therapeutic window for HAMLET in bladder cancer. We also aim to gain new insights that facilitate the drug development for Alpha1H and the diversification of our activities to include other indications.

Outcome of the Phase I/II trial in patients with bladder cancer.

Hamlet Pharma Ltd. is making great progress and has just concluded the first part of a clinical trial in patients with bladder cancer. Drug development often takes many years, due to complex development and approval processes. Based on our extensive prior experience, the drug candidate, Alpha1H, has passed a number of important milestones in a relatively short time and with moderate cost. 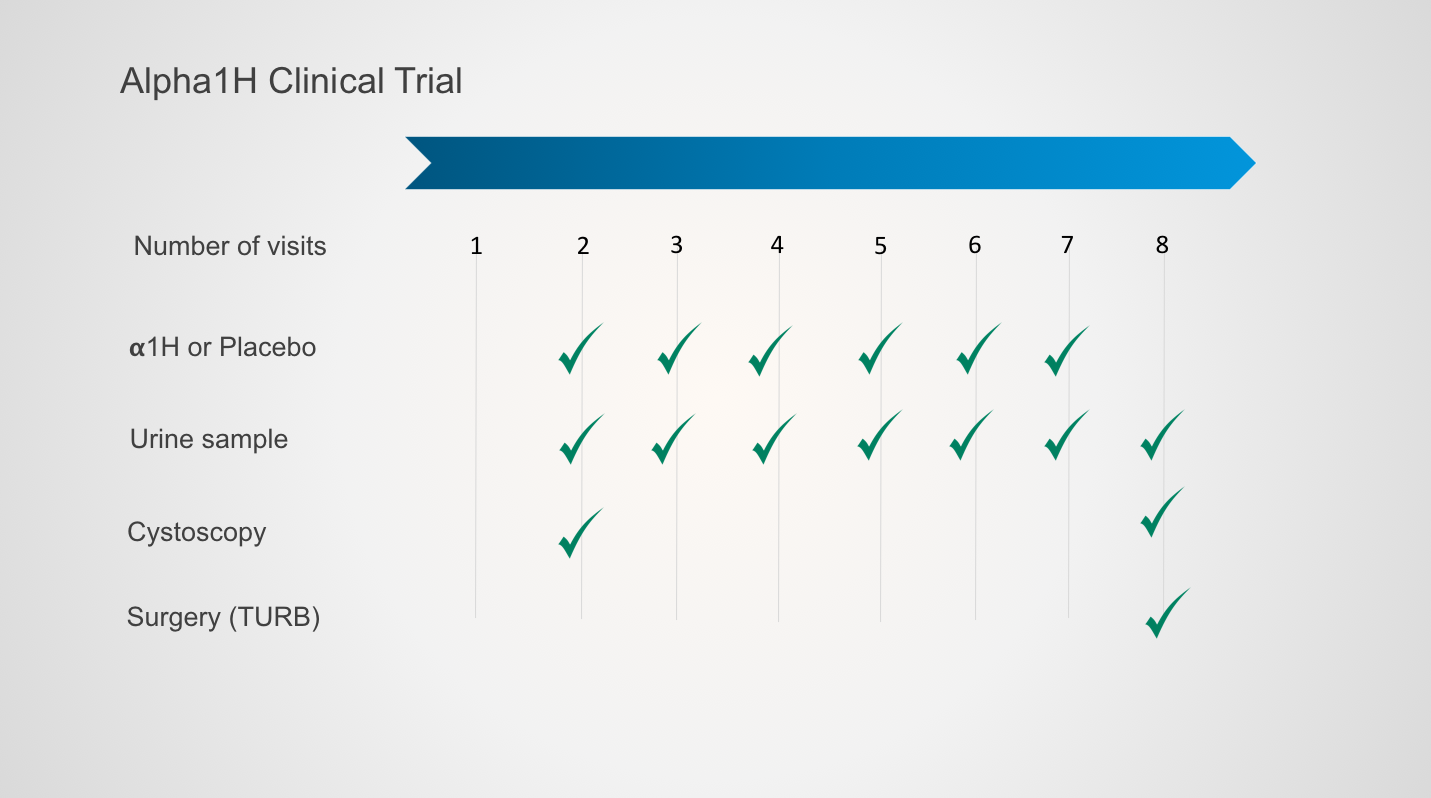 The clinical trial is being conducted at a leading European centre for bladder cancer studies, in compliance with European regulatory requirements. The investigator has prepared the clinical trial protocol jointly with Hamlet Pharma, as well as the study design and documentation for the ethics application. The subjects have received six intra-vesical instillations of Alpha1H or placebo.
The trial is being monitored by a well-respected Contract Research Organization (CRO), in accordance with applicable guidelines. The CRO ensures that the study meets both European and US FDA quality standards. In addition, they are responsible for Data Management, Statistics, and Pharmacovigilance.

The study is designed to collect data on safety (pharmacovigilance), tolerability, pharmacokinetics and pharmacodynamics of Alpha1H, and to evaluate the efficacy of Alpha1H as a cancer drug. The study will use cell shedding after instillations of Alpha1H as a biomarker of cancer cells death. This will be an important measure of effect, together with molecular endpoints.

Hamlet Pharma is currently developing a family of drug candidates based on HAMLET. Multiple in vitro models, animal cancer models and three investigator-driven clinical trials, have shown the strong and broad anti-tumour activity of HAMLET (>40 different types of cancer cells). Remarkably, HAMLET also shows high tumour specificity and does not harm healthy cells or induce tissue toxicity. HAMLET´s tumour killing abilities have since the discovery been confirmed by several international research groups working on different aspects of HAMLET, and the research results have been published in prestigious scientific journals, including The New England Journal of Medicine, GUT, Nature Reviews Gastroenterology and PNAS. In addition, Hamlet Pharma is very active in communication towards stakeholders and the general public

HAMLET and its second-generation version Alpha1H will offer a highly promising alternative to the current standard of care in cancer medicine, including surgery, radio- and chemotherapy, which place a significant burden on the individual patient and on society as a whole. For example, there is a high unmet clinical need for novel therapies as current NMIBC treatment approaches have limitations (Table 1.1). Current standard of care in NMIBC includes Transurethral resection of the bladder tumour (TURBT), a surgery by which tumour cells are cut away from the bladder lining. TURBT is followed by intravesicular injections, drug delivery via catheter into the bladder, of chemotherapeutics (with Mitomycin C or Epirubicin) or with Bacillus Calmette Guérin (BCG) for maintenance and recurrence prevention (5). Even if TURBT completely removes the tumour, tumour recurrence rates are high (50%). As a consequence, typically several TURBTs are performed. Multiple TURBT therapies may result in scarring of the bladder, leading to side-effects as frequent urination or even incontinence. Mitomycin C and BCG are generally given also post-surgery to reduce the risk of recurrence. BCG treatment results in a recurrence free interval of at least 2 years in ~70% of the patients. However, BCG and MMC cause significant side-effects, due to local toxicity and inflammation. Especially BCG treatment is associated with local and systemic side-effects that cause patient discomfort (6). In addition, these drugs are approved for treatment of severe bladder cancer and not specifically for NMIBC. Mitomycin-C, for example, is often used ‘off label’ in NMIBC. In addition, NMIBC can become unresponsive to intravesical chemotherapy.

Alpha1H goes far beyond the current state-of-the-art (Table 1.1). The discovery of HAMLET derived from human breast milk identified a new type of cancer-killing molecule, which has not previously been described. It is highly specific for tumour tissues and targets the tumour directly via its unique mode of action by attacking conserved cancer cell membrane constituents and multiple intracellular targets, and triggering cell death. It has a direct selective apoptotic effect in tumour areas resulting in tumour size reduction, while not affecting adjacent healthy bladder tissue (unlike BCG treatment), as demonstrated in multiple animal studies with murine cancer models and the first outcomes of the Phase I/II trial (ongoing), performed by Hamlet Pharma. Moreover, unlike most available therapies, Alpha1H can be used as both prophylactic and therapeutic agent in early stages of cancer. Based on these unique benefits, Alpha1H will add an entirely new dimension to the treatment of cancer. 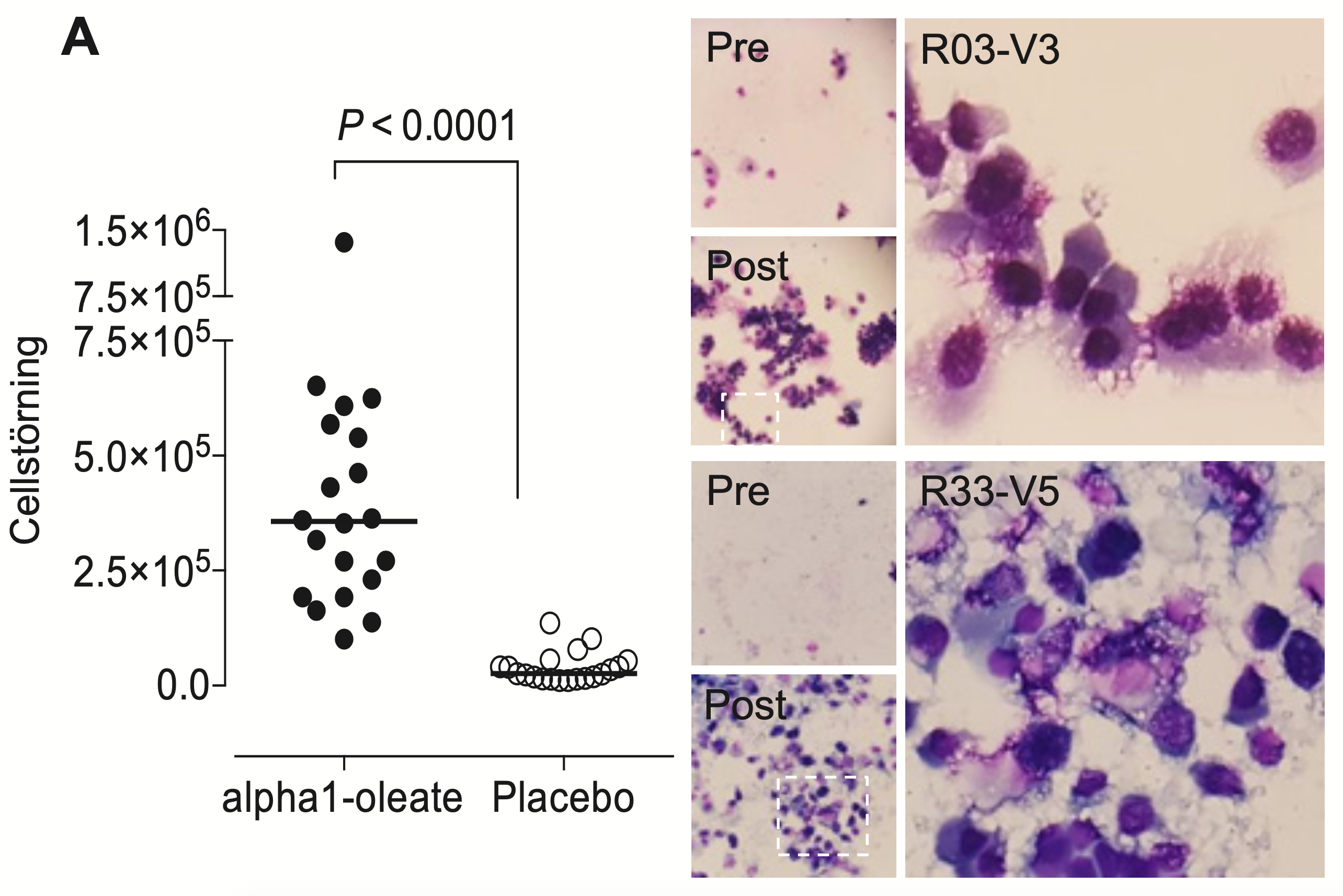 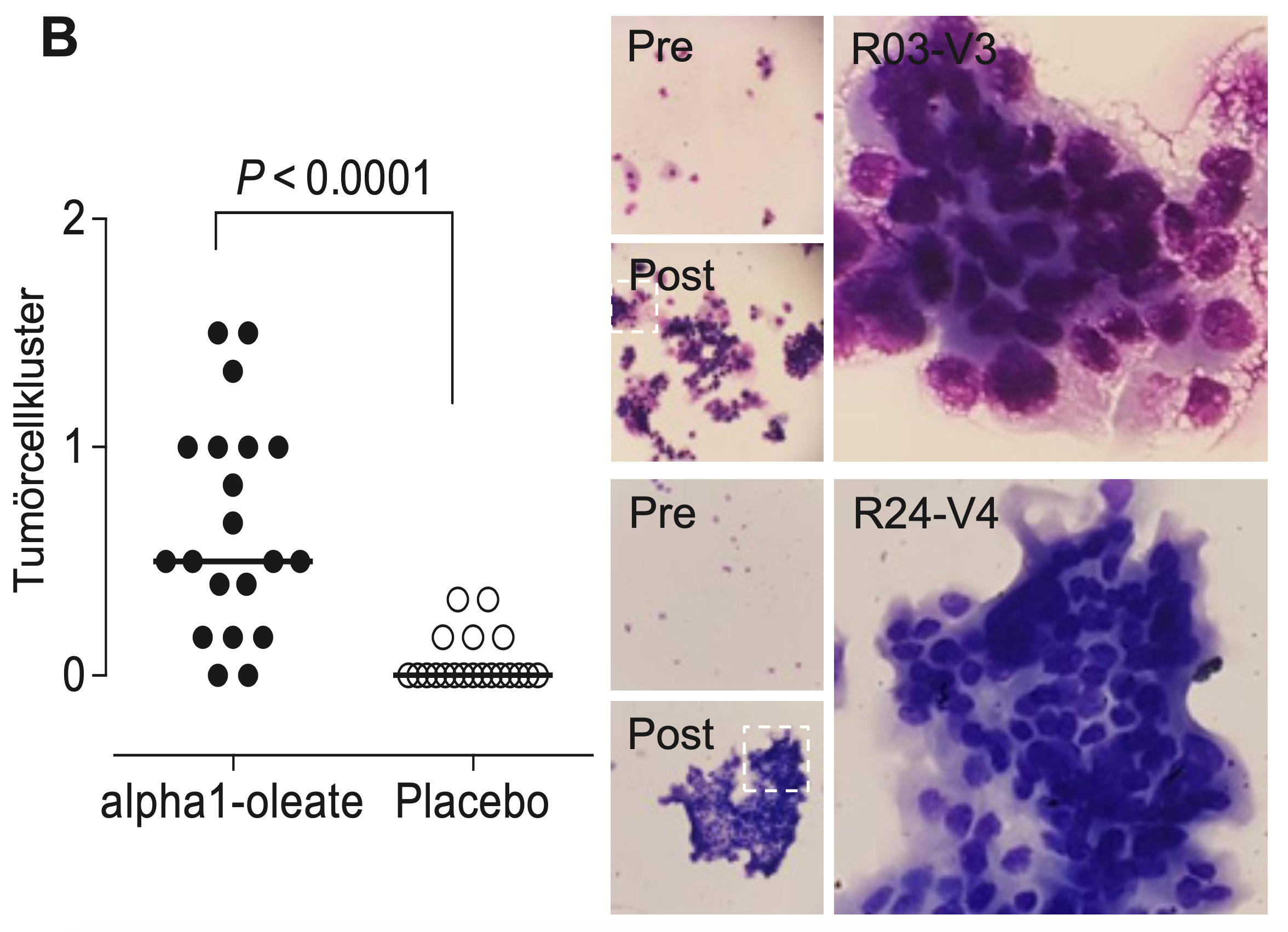 A. The tumor is fragmented and pieces of the tumor are released from the bladder wall and excreted in the urine. B. Large amounts of dying cells are excreted in the patient’s urine after treatment with Alpha1H (right image). Before treatment (left picture) there are few cells in the urine. Tumor cells undergo apoptosis; a non-toxic form of cell death (green cells). 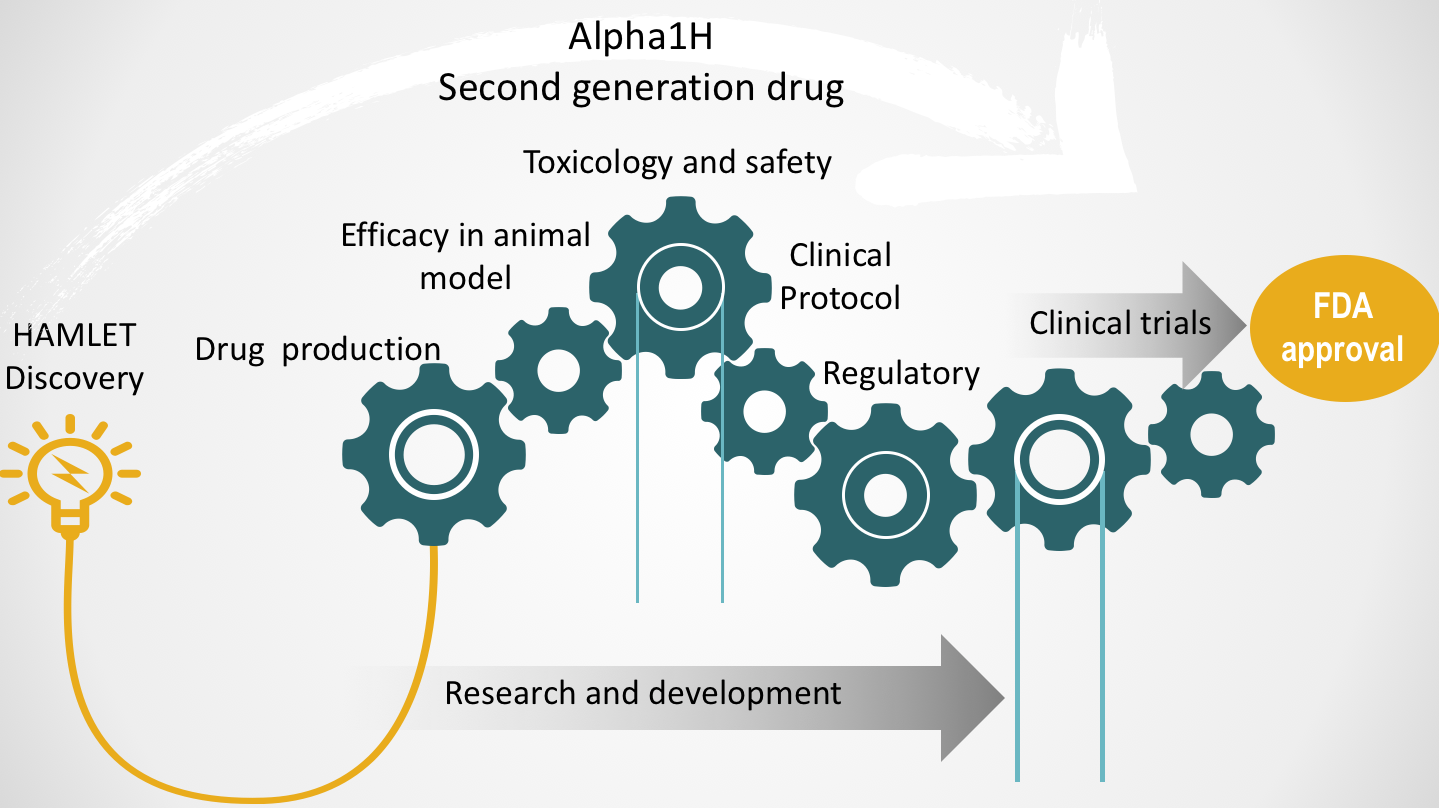 Detailed molecular studies have allowed us to make a map of the protein and to identify domains responsible for the effect on tumour cells. Based on the science, we have developed a new synthetic drug candidate Alpha1H, which is the business end of HAMLET and kills tumour cells with similar efficacy.
The peptide can be synthesized in large amounts and activated by the addition of the lipid, just like HAMLET. We can now guarantee the supply of material needed to initiate placebo-controlled clinical trials.

Clinical studies require large quantities of the drug candidate, produced in accordance with GMP, as well as documentation, according to the guidelines of the European authorities and the American FDA. The first manufacturing batch also called “engineering batch”, has been analysed with positive results.
Hamlet Pharma has successfully established large-scale production of the active compound Alpha1H with full GMP standards. The peptide-based technology has added precision, reduced the complexity of the GMP approval process and lowered production costs. In addition, the patent life of the peptide complexes lasts until 2031. The peptide production technology will also make it possible for the company to explore additional clinical indications and out-licensing of selected therapeutic areas.

In animal studies local HAMLET treatment limited the progression of brain tumours, colon cancer, and bladder cancer, suggesting that HAMLET could be used to prevent tumour development in genetically susceptible individuals. Using the engineering batch of the synthetic Alpha1H complex, we have also shown that Alpha1H reproduces the therapeutic activity of HAMLET. against bladder cancer, in a murine model.

A central goal of cancer therapy is to achieve selectivity for the tumour and minimal toxicity for healthy tissues. Tissue toxicity and side effects are still the norm, however, and even though new, targeted therapies act with greater precision, the notion of tumour-specific mechanisms of cell death is justly regarded with scepticism.
Yet, Alpha1H and HAMLET have not shown toxicity for healthy cells or tissues, in animal models or clinical studies. We are performing toxicity studies to exclude any unwanted effects of Alpha1H.